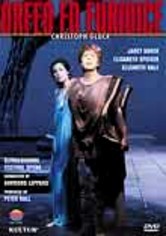 1982 NR 2h 13m DVD
This 1982 Glyndebourne Opera Festival selection features British mezzo soprano Dame Janet Baker in her career debut, a performance that solidified her chops as an opera singer and positioned her to become one of the most celebrated voices of her time. Baker portrays Orfeo, the anguished musical figure from Greek mythology who endures the pits of Hades in search of his beloved dead wife, Euridice.