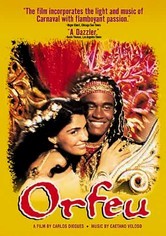 2000 NR 1h 52m DVD
Director Carlos Diegues' vibrant update of the Orpheus myth casts its protagonist, Orfeu de Conceicao (portrayed by Brazilian pop icon Toni Garrido), as a celebrated samba musician and idol to his neighbors in the Rio de Janeiro slums. Amid the clamor of Carnaval festivities, Orfeu falls for provincial beauty Eurdice (Patricia Franca), but violent forces of crime and corruption conspire against the lovers in this stylish and explosive film.