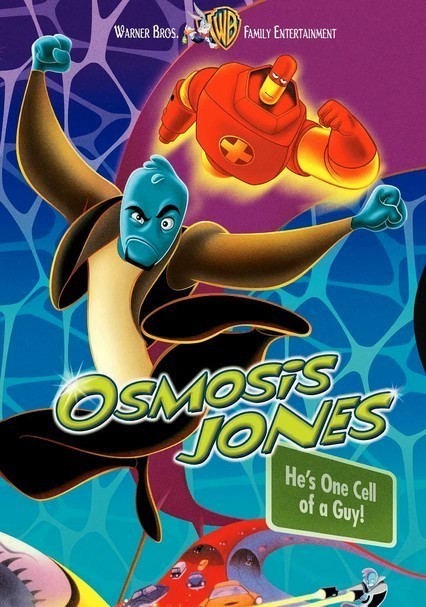 2001 PG 1h 35m DVD
Gross-out kings Peter and Bobby Farrelly outdo themselves with this addled (and partially animated) tale about an out-of-shape, 40-year-old man (Bill Murray) who's the host to various organisms, tissues and blood cells all trying to do their assigned tasks. Chris Rock provides the voice for Osmosis Jones, a daffy white blood cell who tries to police Murray's body. &NFiTrippy&NFi_; is not the word for this film!

Parents need to know that Osmosis Jones is a mix of live-action and animation, and is also a mix of puerile humor and cartoonish violence. While the animated sequences are imaginative, and Bill Murray is always entertaining, there is vomiting, pimple popping, snot, and flatulence. One of the main characters in the live-action sequences is always shown smoking a cigar, and in the animated sequences, a male white blood cell talks to a female white blood cell about "hooking up," and the female white blood cell makes a reference to masturbation. Parents should also know that the movie features a child whose mother has died and who is terribly worried about losing her father, who seems bent on suicide by junk food. Some kids will be upset by the way that the child has to assume the role of parent.

Cartoonish violence. During the animated sequences, characters get into fistfights, car chases, and gun battles between white blood cell police officers and green viruses dressed like criminals. During the life-action sequences, a character vomits on another character. A character fights a monkey for a hard-boiled egg after the monkey takes the egg out of his hand. Characters are killed and there is one apparent death.

Not really an issue, but characters say the word "spit" as an obvious substitution for "s--t."

In its own strange way, the film promotes healthy eating and living.

During the live-action sequences a character is always shown smoking a cigar. This same character encourages a character who seems to be coming down with a cold to drink a beer as quickly as possible, which this character does. During the animation sequences, characters go into a bar that is inside of a pimple, where they drink drinks made to look like alcoholic beverages.