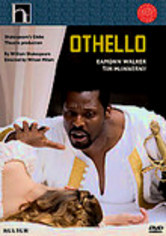 2007 NR 1h 39m DVD
Eamonn Walker turns in a searing, critically acclaimed performance as Othello in this 2007 London production at Shakespeare's Globe Theatre, which co-stars Zoe Tapper as Desdemona and Tim McInnerny as Iago. Shakespeare's immortal meditation on betrayal and jealousy recounts the tragic tale of Othello, the Moor of Venice, who seeks vengeance after his subordinate Iago convinces him that his wife, Desdemona, has been unfaithful.