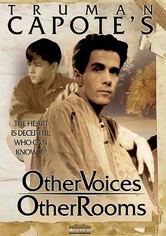 1997 NR 1h 34m DVD
Truman Capote's semi-autobiographical first novel about coming of age in the Deep South during the 1930s centers on 13-year-old Joel Sansom (David Speck), who reunites with his estranged father at the family's shabby plantation, where he must contend with his father's feisty mistress and a strange cousin. Against this less-than-ideal backdrop, Joel slowly matures into an upstanding young man.