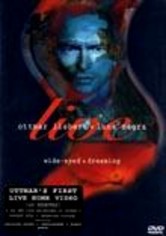 1994 NR 1h 0m DVD
Legendary New Age flamenco guitarist Ottmar Liebert and his band Luna Negra perform in concert at the Calgary Centre for the Arts. Live selections include older favorites such as "Barcelona Nights" and "Snakecharmer," along with hits from Liebert's 1996 Grammy-nominated album "Opium." Listen to commentary for each song and view footage of Liebert in his home in Santa Fe, N.M., where he derives inspiration for his mesmerizing music.