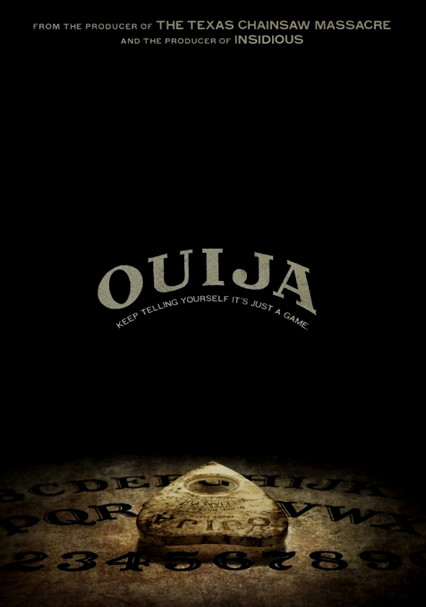 2014 PG-13 1h 29m Blu-ray / DVD
While entertaining themselves with an old-fashioned Ouija board, several young friends unintentionally conjure up a sinister ancient spirit. With their lives at stake, the terrified teens must find a way to escape from their nightmarish situation.

Parents need to know that Ouija is a horror movie based on the official game by Hasbro. Friends experimenting with the game end up connecting with a murderous evil spirit -- which results in several of the teens being killed, including one by hanging and another after her head is bashed into a bathroom sink (other deaths take place off screen). Lots of scary stuff is shown, including creepy ghosts screaming and charging at the camera, sudden noises, and jump-shocks. Some of the teen characters are in relationships with each other, but there's not much kissing. Language is infrequent, and there's no drinking, smoking, or drug use. Hasbro is credited as the legal owner of the Ouija game, and Apple iPhones and laptops are shown. If the movie catches on with teens, it will only be thanks to the "so bad it's good" factor.

Some of the teens are in couples, but there's very little in the way of affection, kissing, etc.

Four teens die. While possessed by evil spirits, one hangs herself, and another bashes her head against a bathroom sink. Another falls into a plastic cover on a swimming pool, but his death is off screen. A fourth death also happens off screen. A girl with sewn-up lips is shown. Most of the violence is centered around spooky stuff -- screaming ghosts, jump-shocks, etc.

One use of "bitch," and two uses of "damn." A character is called a "total spaz."

No message here other than that you should listen if someone tells you not to play with a Ouija Board.

The movie is based on the official Ouija Board game produced by Hasbro, and Hasbro is mentioned in the end credits. But it's unlikely that many teens will want to rush out and buy one after seeing this movie (it's not exactly an advertisement). Some Apple products are shown: iPhones, laptops, etc.