Out of the Blue: A Film About Life and Football at Boise State 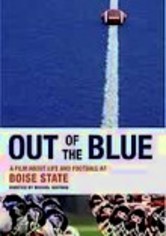 Out of the Blue: A Film About Life and Football at Boise State

2007 NR 1h 30m DVD
Award-winning filmmaker and Boise State alum Michael Hoffman helmed this documentary chronicling the Idaho university football team's ascent from overlooked underachievers to bona fide football powerhouse via its perfect 2006 season. Culminating in a New Year's Day Fiesta Bowl showdown against formidable Oklahoma that many call the greatest college game in history, the film captures a magical season that nobody could have predicted.