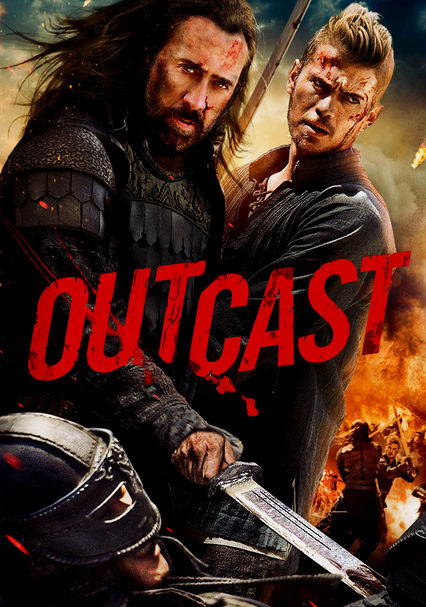 2015 NR 1h 38m Blu-ray / DVD
Hunted by their ruthless older brother after he kills their emperor father, royal siblings Princess Lian and Prince Zhao -- the chosen heir to the throne -- enlist the protection of a European crusader who's looking for redemption.

Parents need to know that Outcast is a medieval adventure with lots of fighting and battles, mostly with swords and arrows, as well as some stabbing with knives, kicking, and head-butting. Some bloody wounds are shown, as well as blood-stained blades. Language is infrequent, but includes one use of "f--k," as well as "damn," "hell," and "piss." One main character uses opium, and viewers see his hazy point of view when he's high or withdrawing. The other main character drinks wine heavily. Two characters share an innocent first kiss. The movie is another example of star Nicolas Cage's puzzling career decline and ranks among the worst he's made. It's unlikely that many viewers of any age will be interested in this, unless they're fond of thinking of giving it a Mystery Science Theater 3000-style drubbing.

A kiss between the princess and the warrior.

Frequent action violence, mainly swords and arrows. Stabbing with swords and knives. Arrow piercing. Throat slicing. Blood on blades. Minor blood spatters and bloody wounds. A man punches a woman. Kicking and head-butting. Explosions. Characters die. A woman is said to have had her tongue cut out.

Characters generally try to help one another in tight situations. Kindness and empathy are prized over fighting.

One main character uses opium. Viewers see his hazy point of view when he's high or withdrawing. The other main character frequently drinks wine. Discussions of "medicine" to kill the pain. In one scene, a character drinks alcohol in a tavern and is drugged via his beverage.