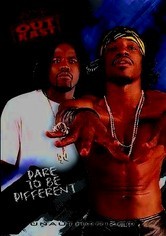 2005 NR 1h 0m DVD
Atlanta's maverick musicians Big Boi and Dre shook up the hip-hop world with their first single, "Player's Ball," which hit No. 1 on the rap charts, and the band's melodious blend of Southern soul, hip-hop, rap and funk continues to reach the top. This insightful documentary chronicles Big Boi's and Dre's lives from childhood to their troubled adolescent years to their early rapper days to OutKast's phenomenal success and beyond.