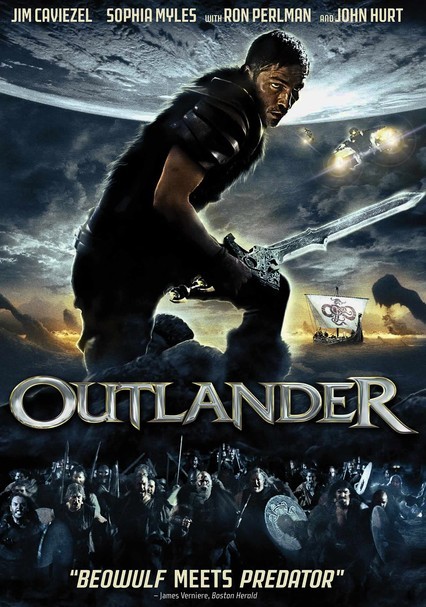 2008 R 1h 55m Blu-ray / DVD
Fleeing an interstellar war, Kainan crashes on the shores of Norway during the Iron Age. An extraterrestrial monstrosity called the Moorwen also survives the crash and begins cutting a bloody swath of destruction through the Norwegian countryside.

Parents need to know that this sci-fi action-adventure has plentiful bloody violence and gory killings, committed against alien and earthlings alike. Children are stated to be among the casualties of the monster. There is plentiful liquor use and manly bonding over a Viking drinking game. There's one f-word as well.

Humans slashed, clawed, decapitated, dismembered, bitten, and killed by the monster. Swords, spears, arrows, and fiery infernos are deployed against the beast. The hero is chained up and beaten.

Humanity committed an unforgivable crime by destroying a species. But Kainan has no choice but to fight against the moorwen and stop its killing spree. In a connected note of taking responsibility, Kainan gives up his chance of escape and links to his past history to stay and help his new Viking friends.

Lusty liquor imbibing and tribal drinking games create a "bonding" between the foreigner hero and the Vikings.