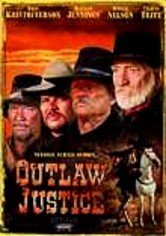 1999 R 1h 34m DVD
In this Bill Corcoran-helmed television Western, former fugitive outlaws and aging gunslingers Lee Walker (Willie Nelson) and Jesse Ray Torrance (Kris Kristofferson), aided by Sheriff Dalton (Travis Tritt), set out to find Holden (Sancho Gracia), who has murdered their friend. Why does Holden harbor such animosity toward his former posse members -- and why has he aligned himself with Col. Lupo (Simón Andreu)?