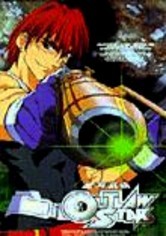 2000 NR 2 discs
This anime series follows Gene Starwind and his 11-year-old associate, Jim Hawking -- bounty hunters who find themselves in a world of intrigue when a mysterious woman named Hilda handpicks them for a special job. Pursued by pirates, the police and seemingly everyone else in the galaxy, Gene and Jim have their work cut out for them -- but fortunately, they've also got one of the most sophisticated ships around: the Outlaw Star.