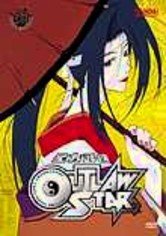 2000 NR 2 discs
This futuristic anime series caught fans of action-packed fantasy by storm. The lives of mercenaries Gene Starwind (voiced by Shigeru Shibuya, with Robert Wicks in English) and Jim Hawking (voiced by Rica Matsumoto and Ian Hawk) take a drastic turn when the pirate Hilda seeks help from their repair shop. In no time at all, Gene and Jim are involved in a mystery they don't understand that involves the police, pirates and some furious aliens.