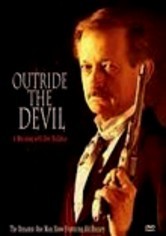 2005 NR 1h 27m DVD
Filmed at the Creative Arts Theatre in Arlington, Texas, this critically praised one-man play stars Kit Hussey as Wild West legend Doc Holliday. Highlighting the final 14 years of Holliday's life, including a reenactment of the famed gunfight at the OK Corral in Tombstone, Ariz., Hussey's work has been lauded as "the definitive portrayal of the dentist turned gambler and gunfighter" by the &NFiFort Worth Star Telegram&NFi_;.