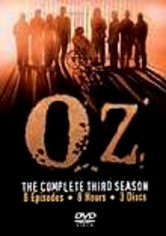 1999 NR 3 discs
This Emmy-nominated series from HBO was groundbreaking when it began, and continues to thrill in subsequent seasons. Emerald City, an experimental unit of the Oswald Maximum Security Prison, focuses on prisoner rehabilitation over public retribution. In this world, every gang has its mutual friends -- and mutual enemies -- and the third season sees animosity grow and relationships become more complex in the gritty world behind the prison walls.