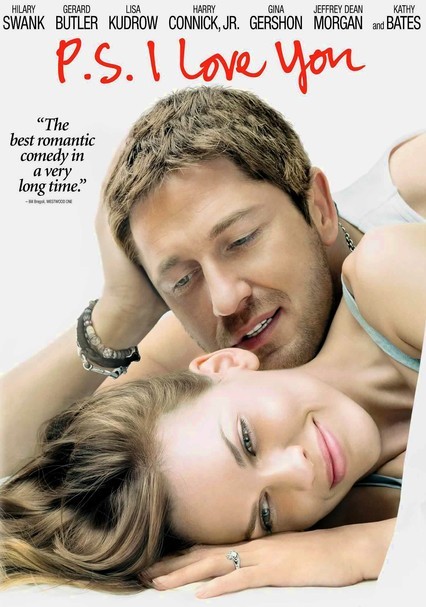 2007 PG-13 2h 7m Blu-ray / DVD
When she loses her beloved husband, Gerry, to a brain tumor, grieving widow Holly Kennedy learns that he left a series of letters behind to help her cope with the pain of living without him.

Parents need to know that, contrary to what the ad campaign might have you believe, this is a somewhat sad movie that deals with loss and grief -- not a straightforward romantic comedy. Its messages -- tell the people you care about that you love them before it's too late, and live life to the fullest -- are admirable, and its characters are goodhearted. But there's a fair amount of strong language (no "f--k," though there's plenty of "s--t" and "goddamn"), some frank talk about sex, and partial nudity. The movie also seems obsessed with getting the main character, Holly, hooked up with another man, as if that's the only fix for the widowed heart.

Couples kiss, sometimes while barely clothed in bed (though nothing but shoulders is glimpsed under the covers); men and women prance around in their underwear; one shot of a naked man's behind; close ups on abs; a woman discusses men's body parts candidly (and a man takes her to task for it); a woman propositions men in social situations.

A woman sizes up men by their physical attributes (and talks loudly about it); friends fight and ignore each other or yell at each other on voicemail; a couple threatens to walk out on each other; a man's Tourette Syndrome is sometimes played for laughs. That said, in the end, the movie is about how friends and family members (dead or alive) support and love each other.

Some mention of specific products/brands, including eBay and Marc Jacobs (specifically, his shoes). Holly has a killer designer wardrobe that, in real life, she probably wouldn't be able to afford.

Some drinking in bars and at musical events, as well as at a funeral. A few times, Holly and her friends end up plastered.