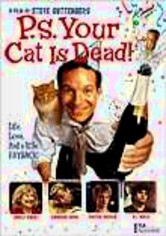 2003 R 1h 32m DVD
With his life already in shambles -- his girlfriend just dumped him, he's lost his acting gig, and his cat is seriously ill -- sad-sack Jimmy Zoole (Steve Guttenberg) comes home New Year's Eve to find a gay burglar (Lombardo Boyar) looting his apartment. Taking the intruder hostage, Jimmy threatens to unleash his pent-up rage on the would-be thief but instead begins to bond with his captive in this engaging comedy also starring Shirley Knight.