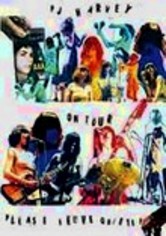 2005 NR 1h 21m DVD
Rebellious British rocker PJ Harvey documents the details and captures the mood of her 2004 concert tour in this combination live performance film and video diary. Along with her personal observations about life on the road and interviews with her fellow musicians and crew, Harvey manages to squeeze 16 smoking songs into her first concert film. Musical highlights include "Uh Huh Her," "My Beautiful Leah" and "Catherine."