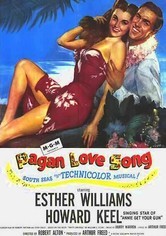 1950 NR 1h 16m DVD
Filmed on location in Hawaii but set in Tahiti, this classic slice of swim cinema stars bathing beauty Esther Williams as Mimi Bennett, a South Seas girl born in the United States who longs to return to American shores. Mimi's all set to swim for it ... until the dashing "Hap" Hazard Endicott (Howard Keel) pulls into port to take over his late uncle's coconut plantation. Rita Moreno co-stars as an island inhabitant.