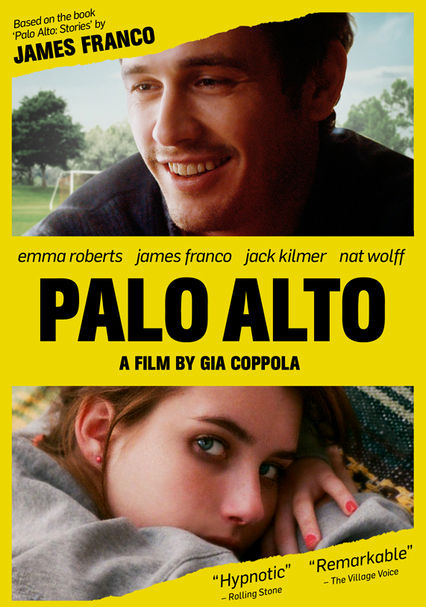 2013 R 1h 40m DVD
Based on a collection of short stories by James Franco (who also stars), this perceptive drama follows a group of disaffected teens in a wealthy California town who have money to burn but little parental supervision -- and even less direction.

DramaIndie DramasDramas Based on Contemporary Literature

Parents need to know that Palo Alto focuses on a group of disaffected high school students in a wealthy suburb who often engage in self-destructive behavior. There's near-constant swearing ("f--k," "s--t," and much more) and a lot of underage drug use (pot), smoking, and drinking (including drunk driving). Some of the kids also have casual sexual encounters. The adults in the film are seen mostly as poor examples for the kids, including a high school soccer coach who seems to prey on the girls on his team and a father who tries to come on to his son's best friend after plying him with marijuana. Though the film is about young people, the themes are quite adult, and it's too mature for younger viewers.

A high school coach hits on and later seduces a student. She's shown stripping to her underwear but keeps her shirt on. A father makes an inappropriate and unwelcome pass at his son's best friend. A girl is shown alone with a boy, apparently about to perform a sex act (viewers don't see anything). A voice-over describes a situation in which a girl ends up having sex with multiple guys.

A boy has a car accident (while drunk) and drives away from the scene. Later, a different boy purposefully drives the wrong way on a highway. A girl smashes a bottle on a guy's head, drawing blood. A teen boy flashes a large kitchen knife and makes threats with it. Some talk of suicide, and at times the film has a menacing vibe.

Underneath the characters' iffy behavior and approach to life is the notion that eventually you have to listen to yourself when it comes to making decisions about your life. You can't always let your choices be guided by your peers.

Some characters use Mac computers and iPhones.

Teens smoke pot throughout the film, and many characters also smoke cigarettes. High school students drink beer and hard liquor at parties, often until they're quite wasted, and one gets into a car accident while drunk. Adults also drink beer and smoke pot and sometimes offer them to teens.