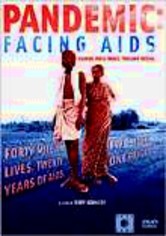 2003 NR 1h 53m DVD
Acclaimed filmmaker Rory Kennedy puts a human face on a disease that's become a problem of global proportions. Having affected 40 million people and counting, HIV/AIDS has wreaked immeasurable havoc during its decades of aggressive assault. Using images taken by famous photographers from 50 countries, Kennedy personalizes the illness, introducing viewers to the men and women for whom the disease isn't just front-page news.