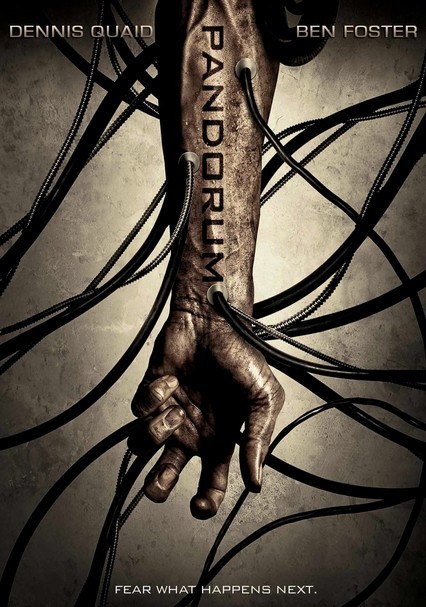 2009 R 1h 48m Blu-ray / DVD
Upon rousing themselves from hyper-sleep, a pair of crewmen assigned to work on a spacecraft discover startling gaps in their collective memory -- including who they are and what, exactly, their mission was in the first place.

Parents need to know that the intense violence in this dark, scary sci-fi movie is apparent in every scene, even if it's not specifically presented in terms of fighting or gore (though there's plenty of those, too). There's a constant, unrelenting feel of terror, tension, and dread, thanks mainly to the movie's overwhelmingly dark, metallic, deliberately unsettling sets. Alien creatures threaten to jump out from every dark corner, and the soundtrack's alarming use of screeching noises adds to the general unease. Likely it will be too much for most kids to handle. Despite that, and despite the characters' severe trials and tribulations, the movie has a solid ethical core and a generally hopeful outlook. Characters set aside their differences and team up for the greater good, and despite his potty mouth (expect plenty of "f--k"s and more) and initial disorientation, the hero ultimately behaves bravely and selflessly.

Not much of an issue. The hero appears wearing only underwear in one scene, and the heroine displays ample cleavage throughout, but there's no nudity and no suggestion of sex.

Sudden attacks occur throughout, complete with stabbings and slashings with sharp instruments. An eyeball is pierced with a needle, and a character's stomach is sliced open, with guts visible. Blood, muck, and slime are plentiful. Since the story takes place mostly in the dark, in twisted, sinister-looking corridors, and using a terrifying array of screeching sound effects, there's a constant state of tension and dread. Characters engage in several lengthy fights, with grabbing, punching, hitting using blunt instruments, and shots from a "non-lethal" wrist ray gun.

Despite the movie's unrelenting violence and dark tone, the characters actually behave in an admirable way; characters from different backgrounds team up to strive toward a common good. They choose hope over despair and order over chaos. They show bravery and selflessness (the hero tries to go back to rescue fallen comrades). They also choose not to inflict violence on an alien child.

Not really an issue. A sedative is given to a hysterical character against his will, and other characters are rendered unconscious with knockout gas.