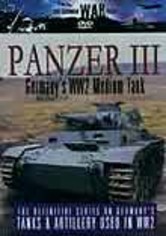 2005 NR 1h 0m DVD
Meet the Panzer III medium tank, one of Germany's showpiece weapons in World War II, often appearing in newsreel footage documenting early Nazi victories in Europe. Though it could easily hold its own against the Allied forces' tanks, the Panzer III met its match on the Eastern Front against the Russian T-34. By the end of the war, it had been shifted to secondary fronts and was often used as a command tank rather than on the main battlefield.