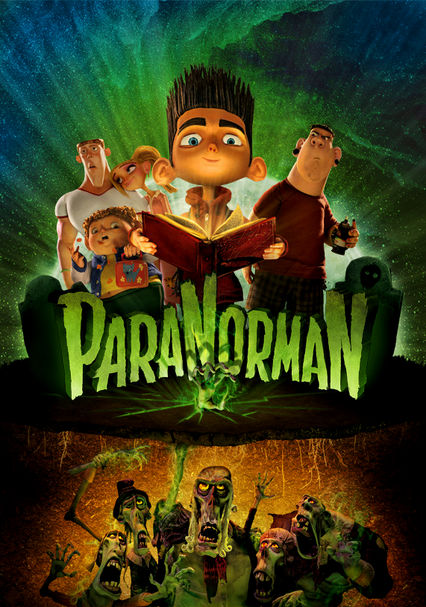 2012 PG 1h 36m Blu-ray / DVD
When an army of zombies invades a small town, it's up to an odd local boy with a knack for communicating with the dead to save the day. But judgmental adults prove to be even more formidable adversaries.

Parents need to know that ParaNorman is, above all else, a monster movie, and it will scare little kids. It's animated (stop-motion), but it's full of ghosts, corpses, zombies, and witches and is aimed toward older kids and teens. There are chases, "jump" scenes, characters in peril, frightful zombies with body parts flapping and falling off, creepy houses with looming shadows (and, in the 3-D version, a swarm of bugs bursting out of a teddy bear straight at you), an angry mob with weapons, and much more. The language (lots of insults directed at Norman) and teen hormones (overt flirting and discussion of how "hot" a couple of teen characters are, as well as flashes of cleavage and a broad shirtless chest) are also more mature than in most animated movies for the younger set. There are also hurtful conflicts between parents and kids, some bullying takes place, and a character is revealed to be gay in a low-key way. While it has themes about tolerance and teamwork and could be a great pick for brave older tweens and middle-schoolers, this cool frightfest is very likely to be too much for younger moviegoers to handle.

Courtney aggressively flirts with Mitch, whom she first bumps into while he's shirtless and wearing only a towel. From that moment on, she makes comments about how "hot" he is and tries to get him to reciprocate her come-ons. She wears a midriff-baring exercise suit that she zips down to show off her cleavage; she's also very curvy (as are other female characters). A butt-grabbing is implied; Norman mentions watching "sex and violence" on TV early in the movie.

The movie has an overwhelmingly scary, dark, moody, tone that's set by Norman's interest in monster movies (the movie opens with an animated monster-movie scene that includes a person in peril being chased) and continued by his ability to talk to ghosts (including his grandma, which could be upsetting for some kids) and encounters with frightful-looking zombies. Many frightening scenes will scare younger viewers used to more benign animated movies. Some of the ghosts that Norman can speak to are shown with fatal injuries and/or obvious reasons for their deaths. A character dies on screen. Many scenes feature either a corpse (Norman has to "wrestle" with one in one gross sequence) or falling-apart zombies. The kids think they're going to be ripped apart by the monsters, who chase them in a long sequence that includes tense moments and some startling "jump" scenes. The witch's ghost is very loud and destructive and nearly kills Norman and his family; it also causes a very ominous/scary cloud and sets off hostile sparks and blasts of electric energy. The townsfolk become a bloodthirsty mob ready to use their weapons (including guns) on the witch, zombies, or anyone who appears to be aligned with them. Norman's great-uncle seems creepy and strange (and his house is even more so); his parents argue; a car crashes and rolls.

Insults like "freak," "stupid," "crazy," "loser," "ghost boy," "freakshow," "fatty," and more are used fairly frequently against Norman and his friend. Norman says "the F-word" (referring to a swear word, but not actually saying it). A (dead) grandmother calls her son "jackass." Courtney makes very authentic sounding "mean girl" comments like: "I really like her a lot, but she's a complete loser." Also "darn it," "damnation," "sucks," "boobs," "OMG," "Jesus" (as part of an exclamation), "weiner," and "hell."

ParaNorman's themes include tolerance, understanding, unconditional friendship, bravery, and family support. Norman evolves from a lonely misfit who's bullied at school to a town hero by accepting not only his own selfless mission but acknowledging his need for help -- and helping others. Parents will also learn the importance of giving their children the benefit of the doubt and really listening to them instead of dismissing their ideas as just wacky or strange.