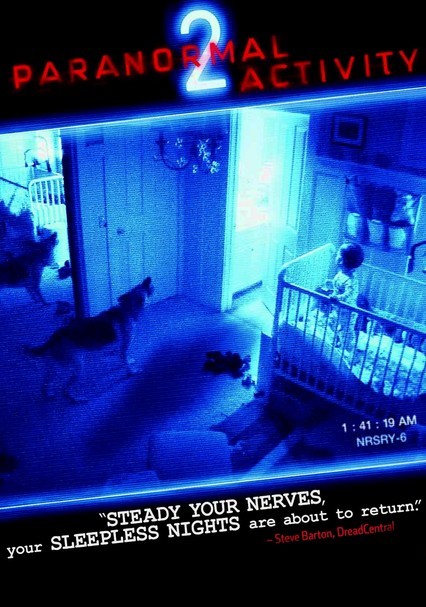 Parents need to know that Paranormal Activity 2 -- a follow-up to 2009's low-budget horror hit -- is as full of dread and terror as the original. While hardly any violence is shown on screen (most of the scary moments involve loud noises and sudden movements), tension and fear are constant, and -- as in the original -- the viewer's imagination provides most of the fright. There's off-screen violence involving a dog, a toddler is put in mild peril, and one character's neck is snapped. Language is fairly infrequent but strong; it includes "f--k," "s--t" and "p---y." Teens who survived the original will most likely want to see this one, too.

In one scene, a married couple considers taking a bath together and possibly having sex, though it's mplied through mild innuendo rather than shown.

While there's no overt violence -- and only a tiny bit of blood (a bite mark) -- the movie has almost constant sense of dread and terror. Most of the fear involves loud noises and sudden movements, except for a quick sequence in which a character's neck is broken. There's some off-screen violence involving a dog and some mild peril involving a toddler -- an invisible demon slowly drags him across his crib, but he's unharmed.

These terrible things begin happening to this family -- presumably -- because of something an ancestor did; there's no sense of justice. During the crisis, the family works hard to protect the new baby, but at the same time, they don't seem able to work together. The father refuses to believe that anything is wrong. Toward the end of the story, the father makes a hard, cruel decision, which winds up biting him back.

A Dunkin' Donuts ad can be heard on television. Characters play with a Ouija Board at one point.