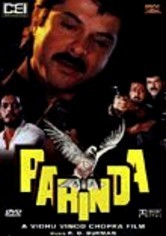 1989 NR 2h 25m DVD
Circumstances force Kishen (Jackie Shroff) to become an enforcer for a vicious mob boss (Nana Patekar) to finance the education of Kishen's younger brother, Karan (Anil Kapoor). Kishen tries to keep his naïve brother away from the criminal underworld, but that becomes impossible when the don uses Karan as a pawn to eradicate a cop who's been cracking down on illicit gang activities -- and who happens to be Karan's best friend.