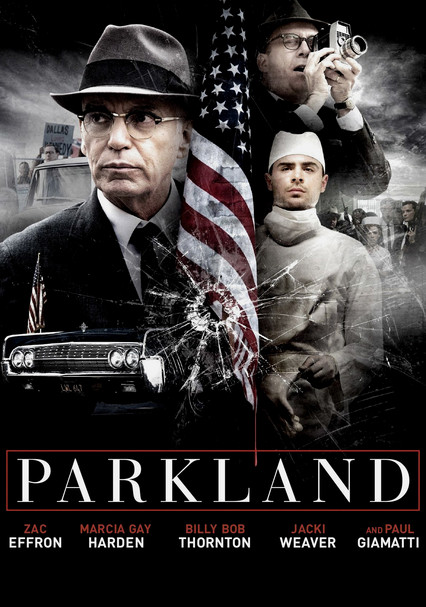 2013 PG-13 1h 27m Blu-ray / DVD
Based on Vincent Bugliosi's book, this powerful drama takes place in the Dallas hospital where John F. Kennedy was brought after being shot on Nov. 22, 1963. Intertwining stories follow doctors, FBI agents, an unwitting cameraman and many others.

Parents need to know that Parkland tells the story of President John F. Kennedy's assassination in 1963 through the eyes of some of the story's minor players -- for example, Abraham Zapruder, Lee Harvey Oswald's brother, the doctors who tried to save the president, and the Secret Service agents who weren't able to protect him. It's not clear whether teens will be interested in this type of history, and they might be better served to look elsewhere for a clearer idea of who Kennedy was, what he did, what happened to him, and why it mattered. Expect some gruesome, bloody hospital scenes and lots of arguing. Language isn't frequent but does include some strong words (one use of "f--k," plus "s--t," "bitch," etc.). There's a brief scene of Zac Efron flirting with a nurse, and many of the characters smoke cigarettes in a casual way (accurate for the time period).

Zac Efron's character flirts with a nurse in the early scenes. He slides his hand around her waist as he walks by, and she responds with a smile.

The Zapruder film of John F. Kennedy's assassination is discussed and partly seen but not completely shown. Characters are shocked when they see it. A bloody Kennedy is wheeled into the emergency room, and viewers witness a blood-soaked attempt to save his life. Mrs. Kennedy is shown spattered with blood from the shooting, and she dazedly hands over a small piece of brain and skull to a nurse. Lee Harvey Oswald is also wheeled into the same hospital after his shooting. Stressed-out characters frequently argue and shout at one another.

The movie more or less celebrates the quiet heroism of people who are dealing with a national tragedy -- though not all of them succeed.

Several adult characters are seen smoking cigarettes throughout the film, mostly in a casual, background way. It's all accurate for the movie's time period.