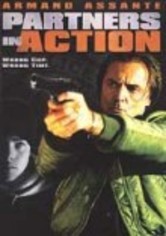 2002 R 1h 32m DVD
Although he no longer works as a police officer, Jack Cunningham (Armand Assante) can't help being pulled back into the fray. This time, though, he's out of the brotherhood as he's investigating former colleagues, some of whom may be deeply embroiled in a drug and corruption scandal that's eroding the department's mission. But he soon ends up with the difficult task of shielding a boy, Teddy (Douglas Smith), who knows a little too much.