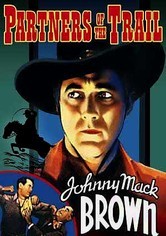 1944 NR 0h 57m DVD
When someone begins murdering ranchers in the frontier town of Springfield, Doc Applegate (Lloyd Ingraham) calls in U.S. marshals Nevada Jack McKenzie (Johnny Mack Brown) and Sandy Hopkins (Raymond Hatton) to catch the culprit. But the mystery deepens when Applegate is killed after returning from a successful prospecting excursion and depositing his gold in the Springfield Wells Fargo vault. Christine McIntyre also stars in this 1944 oater.