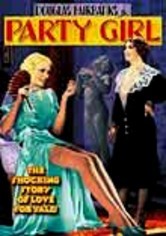 1930 NR 1h 7m DVD
In this early "social" drama meant to warn the masses about the dangers of naughty impulses, a call-girl service deliberately bilks gin-swilling bachelors out of their hard-earned cash and seeks to ruin the lives of inexperienced young men. One such fellow, Jay Rountree (Douglas Fairbanks Jr.), the son of an important industrialist, attends a party only to learn that both his ladylove and his father are harboring sleazy secrets.