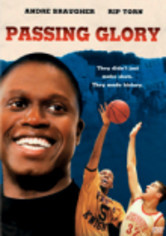 1999 NR 1h 34m DVD
Based on a true story set in 1960s New Orleans, Passing Glory stars Andre Braugher as Father Joseph Verrett, who sets up a match between his all-black high school's undefeated basketball team and the top squad from an all-white prep school. In his attempt to stage the city's first integrated basketball game, Father Verrett struggles to make sure his team is treated with respect while facing opposition from both black and white community leaders.