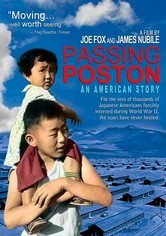 2008 NR 1h 45m DVD
Documentarians and award-winning journalists James Nubile and Joe Fox's poignant film recounts the harrowing story of four Japanese-Americans imprisoned in the Poston Relocation Center internment camp during World War II. Through moving testimonials, the film's subjects paint a vivid picture of what life held for a child detained in the camp and the struggles they now face in trying to make sense of the events of the past.