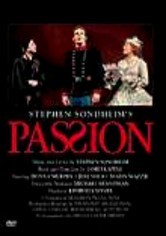 1996 NR 1h 54m DVD
Giorgio (Jere Shea), a handsome young army officer, finds himself stationed in Italy, far away from his love, the beautiful Clara (Marin Mazzie). Soon, he meets the pale, mortally ill Fosca (Donna Murphy), who falls madly in love with him and desperately tries to make him love her back. James Lapine directs this filmed version of Stephen Sondheim's critically acclaimed Broadway musical.