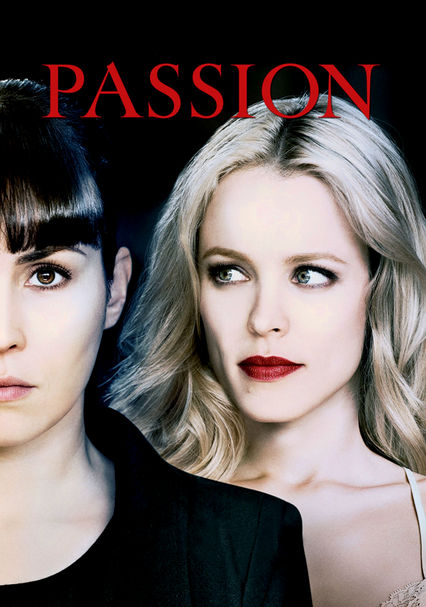 2012 R 1h 42m Blu-ray / DVD
Christine, an ad exec with ice water in her veins, has no qualms about taking the credit for a plum idea dreamed up by her mousy assistant, Isabelle. But the incident sparks shy, passive Isabelle to undertake a campaign of revenge against her boss.

Parents need to know that Passion is an erotic thriller from director Brian De Palma. There's one murder, with neck-slicing and some spurting blood, as well as some other scenes of simmering violence. But sex is the biggest issue; both female leads are sleeping with the same man, and the sex scenes are fairly strong, with some nudity (breasts). Various women are shown kissing. Language isn't constant but includes a few uses of "f--k," plus "c--t," "bitch," and "s--t." Several brands are shown, including Apple, Panasonic, and Coca-Cola. Characters drink a great deal and are sometimes drunk. One main character smokes cigarettes, and the other pops prescription pills. Although the movie focuses on powerful female executives, they're cruel and manipulative and can't be considered positive role models for teens.

The two main female characters are sleeping with the same man. Viewers see sex scenes featuring both pairings. One of them involves masks and heavy breathing, while the other is more graphic, with a naked breast on display and the man shown thrusting from behind. (He shoots a video of the encounter, and it's shown later on.) The characters also shoot a sexy commercial involving a woman wearing tight jeans and men ogling her as she walks by. Sex toys are shown. A character answers her door topless, but her breasts aren't shown. Viewers see brief images of centerfolds and nudie pictures hanging on a wall. There's also some sex talk and innuendo.

There's one murder in the movie, with neck-slicing and some brief spurting blood. A car crashes into both a post and a soda machine in a parking garage, and the driver throws an angry tantrum. A very brief scene walking through prison shows some women taunting each other and fighting. Also tense conversations, threats, etc.

Although the movie focuses on powerful female executives, the message is that they're still ensconced in a world of backstabbing, revenge, and one-upsmanship, not to mention sex and alcohol.

The Apple computer logo is shown more than once, in key scenes. The characters are working on an ad campaign for Panasonic, and this logo is shown a few times. Stolichnaya brand vodka is shown. A Coca-Cola machine is important in one scene.