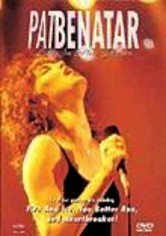 1983 NR 1h 0m DVD
Former opera singer Pat Benatar became the rock princess of the 1980s, racking up a string of chart-topping hits and an eventual four Grammy Awards. This live concert, filmed at Veterans Memorial Coliseum in New Haven, Conn., takes fans to the pinnacle of Benetar's success in 1983 and includes the breakout singles "Shadows of the Night," "Heartbreaker," "Hit Me with Your Best Shot" and "Hell Is for Children."