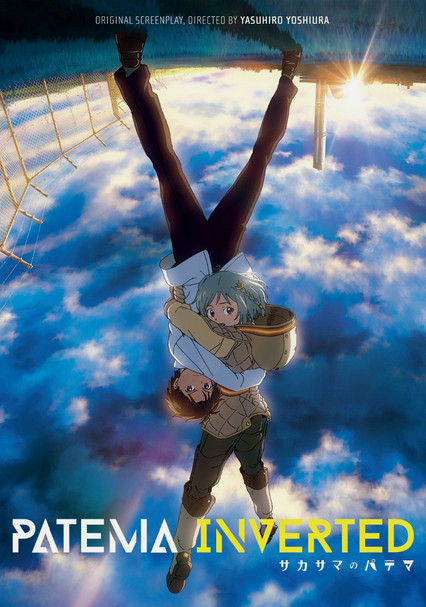 2014 NR 1h 39m DVD
From her underground home, Patema tumbles into a void and discovers a world that's upside down from hers. There she meets Age, a student who falls head over heels for Patema -- but their inverse gravities threaten to keep them apart.

Parents need to know that Patema Inverted -- which is a Japanese anime movie with English subtitles -- addresses the issue of one society's unreasonable bias against another. The more powerful group uses guns and other violent means to suppress the underground, which could be younger viewers' first introduction to totalitarianism. But Patema is a plucky and brave young girl, and her friendship with Age is a model of loyalty and devotion. Relationships and courage triumph over fear.

Scientists tamper with Mother Nature, which reverses gravitational pull and causes everything, including entire cities, to unmoor and break off into the sky. Renderings of this phenomenon might be frightening to younger children, but neither blood nor gore is pictured. Guns and a knife are displayed threateningly. A dead body is seen, but no blood is shown. Renegades are captured in flying nets.

Judging others by their appearance can cause harm. Fighting for your principles is worth the effort and risk. Sometimes rules shouldn't be obeyed if they're problematic rules.