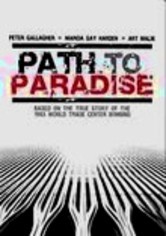 1997 R 1h 31m DVD
This gripping docudrama recounts how global terrorism first arrived in the United States with the bombing of New York City's World Trade Center in 1993. Chronicling events preceding the attack, the film traces not only the motivations and actions of the Islamic extremists plotting to blow up targets across the city, but also the FBI's response -- and missteps. Peter Gallagher, Marcia Gay Harden, Paul Guilfoyle and Allison Janney star.