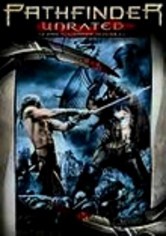 2006 UR 1h 47m Blu-ray / DVD
In the wake of a battle waged on North American soil between Norsemen and Native Americans, a young Viking boy (Karl Urban) is left behind and raised by the very tribe his kinfolk had so brutally and vehemently attacked. But when the Vikings return years later, the boy -- now a man at 25 -- vows to end the invaders' raids by leading the charge against his ancestors. This rousing period adventure spawned a graphic novel adaptation.

Parents need to know that this period action film earns its R rating with frequent scenes of hard-hitting, bloody violence. Weapons including swords, rocks, arrows, spears, spiky traps, chains, maces, and axes are used to decapitate, dismember, hang, beat, impale, stab, and crush victims (broken, rotting bodies are shown). Others die via drowning, avalanche, bear attack, falls, and more. Images of the mayhem range from aggressively chaotic to slow-motion poetic, with repeated shots of spurting blood (primarily from chests and necks). Most of the characters are bent on vengeance; the Vikings plan to exterminate the Native Americans (whom they call "savages") and are depicted as tall, dark monsters who tend to roar more than speak. When they do talk, they use a couple of mild swear words (in subtitles), including "bitch" and "damn."

Man and woman lie close to each other, apparently nude (they're trying to keep warm, but they're also the designated romantic couple).

Violence is alternately represented in lyrical and hard-hitting imagery. A child is discovered in a wrecked Viking ship among corpses; battle scenes include spearing, decapitation, arrows, knives, swords, trampling, falling, an arm getting lopped off, throats being cut, a bear attack, impaling, beating, kicking, hanging (bodies displayed after death), drowning, and crushing by an avalanche. Frequent shots of blood spurting. Vikings throw woman against a log as if to rape her, but the hero steps in.

Just a few curse words used by Vikings (in subtitles): "damn" and "bitch."

The Vikings are all-around grisly and evil; most of the Native Americans are stereotypical presented as being nobly in tune with the land. The protagonist is caught between both groups and is vengeful until he's killed all his enemies.

Brief use of medicinal herbs/smoke during a a healing ritual.