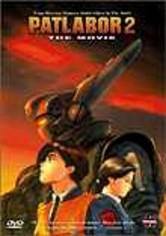 1993 NR 1h 54m DVD
In this thought-provoking sequel, Capt. Kiichi Goto and his colleagues in the Mobile Police unit find themselves caught in a web of political intrigue as a disgruntled veteran of the Japanese Self-Defense Force launches a terrorist attack on Tokyo. Making matters worse, the mastermind behind of the assault is none other than Shinobu Nagumo's former teacher and ex-lover, Tsuge Yukihito. Can Goto and Nagumo apprehend him before it's too late?