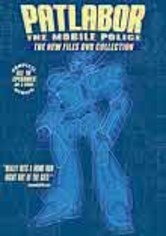 1996 NR 3 discs
From the director of Ghost in the Shell, this action-packed sci-fi adventure series follows the efforts of a valiant group of robot police known as the Patlabor Squad to defend the city of Tokyo at any cost -- even if it means risking their own lives. Rejoin Noa and her trusty giant robot suit, Alphonse, as they face their old nemesis: a black robot known as the Griffin, who will stop at nothing to take them down.