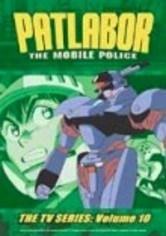 1989 NR 1h 40m DVD
In the not-so-distant future, giant manned robots known as Labors are commonplace, greatly increasing man's productivity. But they're also the victim of a new kind of crime. Enter Special Vehicles Division 2, a branch of the Tokyo Mobile Police Force formed specifically to combat the problem. Get ready for a science-fiction police drama set against a tale of danger and high-tech revenge. Vol. 10 contains episodes 39-42.