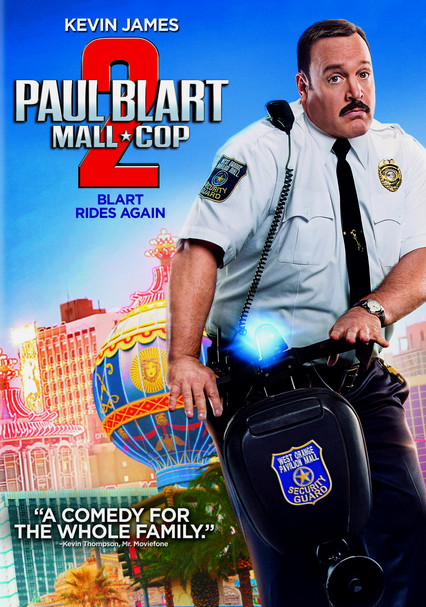 2015 PG 1h 34m Blu-ray / DVD
In this comedy sequel, fumbling rent-a-cop Paul Blart travels to Las Vegas for a grand security guard expo, where he faces broad contempt from his peers before stumbling across a gang of professional thieves planning a major art heist.

Parents need to know that this sequel to Paul Blart: Mall Cop dishes up more of the same slapstick-y, cheesy silliness that was in the first one (as well as a fair bit of heart, especially in the form of Paul's dedication to his job and his relationship with his daughter). Also similar to the first one? All of the product placement -- there are signs, stores, and name-brand stuff everywhere. And the fat jokes. And the cartoonish violence -- expect tons of pratfalls, as well as fist fights and battles involving non-lethal weapons. There are also tenser moments when characters' lives are in danger and when guns make an appearance. A high school senior attends a party where underage kids are drinking (she doesn't), but there's not much in the way of language or sexual content (some flirting and allusions to sex -- but no Victoria's Secret scene this time!).

Some flirtations and allusions to sex.

Some gunfire, plus fights with posturing and shoving and the occasional use of non-lethal weapons like stun guns. Most of this is played for laughs, but it's still clear that the villains are out to kill Blart and his fellow guards. His daughter and her friend are physically threatened. A bird attacks a man, and vice versa. He also accidentally hits an elderly woman. Two characters are shown being hit by vehicles. A man is Tasered. Lots of pratfalls.

Mild -- mostly exclamations along the lines of "sweet mama!" etc.

Open communication is key to a positive parent-child relationship. Also, loving what you do is more important than any accolades. But also jokes at the expense of the overweight and the elderly.

Some social drinking (including casino scenes); in one scene, young people, including a high school senior, are at a party where people are drinking (the girl doesn't partake).