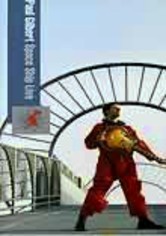 2006 NR 1h 54m DVD
Known for his versatility and speed, guitarist Paul Gilbert was named one of Guitar One Magazine's "Top 10 Shredders of All Time." Together with Linus of Hollywood on bass and Marcus Minnemann on drums, Gilbert performs a selections from his 2005 album "Space Ship One" along with some of his classic tunes. Wearing space suits to underscore the album's theme, the trio rips into songs including "Scarified," Down to Mexico" and "Interaction."