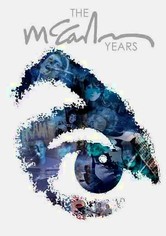 2007 NR 3 discs
Jam-packed with live performance footage, over 40 music videos and audio commentary, this compilation celebrates Paul McCartney's solo career, moving from 1970's "Maybe I'm Amazed," through the Wings era, to contemporary concerts. Highlights include a rare promotional feature for Wings album "Band on the Run," his 1985 Live Aid appearance, a 1991 appearance on MTV's "Unplugged," a 2004 performance at Glastonbury Festival and much more.