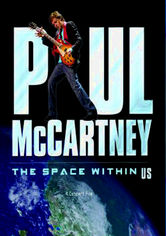 2005 NR 1h 55m DVD
This documentary captures the legendary Paul McCartney on his 2005 world tour performing a slew of Beatles and solo hits, including "Eleanor Rigby," "Hey Jude," "Yesterday," "Maybe I'm Amazed" and "Flaming Pie." The film also presents the reflections of some high-profile McCartney fans, from former President Bill Clinton to musician Eddie Vedder to astronauts on board the International Space Station.