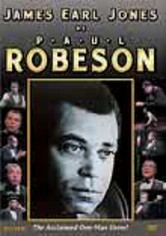 2004 NR 1h 55m DVD
James Earl Jones turns in a commanding performance as charismatic actor and singer Paul Robeson in this one-man show. In Jones' expert hands, Robeson springs to life, relating how he became one of the first black stars (appearing in films such as The Emperor Jones and Show Boat) who dared to speak out against racism. Robeson was also enmeshed in other controversial issues and found himself blacklisted for siding with Russia during the Cold War.