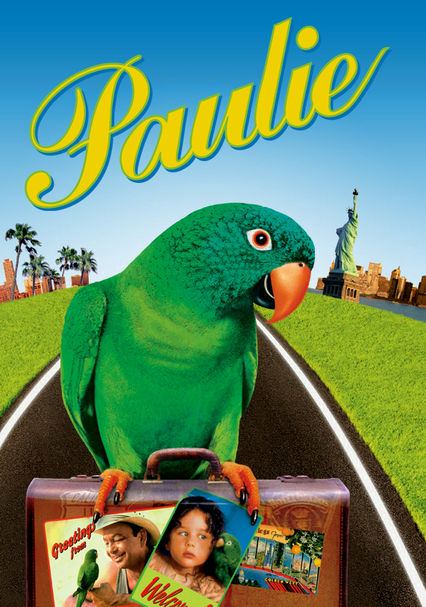 1998 PG 1h 32m DVD
Wise parrot Paulie (voiced by Jay Mohr) can ask for more than crackers, as Misha (Tony Shalhoub), the janitor at an animal-research lab, discovers. Paulie reveals via flashbacks how he ended up at the facility after being separated from his original owner, 5-year-old Marie (Hallie Kate Eisenberg), then embarked on a decades-long search to reunite with her. Upon hearing Paulie's tale, Misha decides to help the loquacious bird realize his dream.

Parents need to know that Paulie is a sweet, sensitively handled tale about the bond between a bird and his owner, with some great lessons about friendship, but it does include the death of a caretaker (implied, not shown explicitly or with any scariness), a tearful separation between a child and her pet, and a few other potentially frightening scenes. In one, a girl falls off a roof but is rescued; in another, the bird is abandoned, and later becomes trapped in a house. Additionally, for a portion of the film the bird is an accomplice to theft and robbery, though he learns it is wrong.

A girl falls off a roof and is rescued. A bird is abandoned and trapped in a house. A bird is in agony when his wings are clipped. An ambulance signals the death of a character, though nothing is explicit or scary.

The movie has a few instances of insulting language, such as when Paulie calls Misha a "mutt monkey," and calls a pet cat a "stupid hairball." A pawn shop owner briefly mutters "Goddammit."

Paulie is filled with extremely positive messages about friendship, respect, compassion, valuing the moment, telling others how you feel about them, and the value of simply listening to one's fellow humans. Paulie's story only unravels in the film because Misha believes it has innate value. Paulie listens to Ivy's story about her life traveling with her husband, and later, Ignacio's romantic woes.

In one minor scene, patrons at an outdoor bar/taqueria consume beers during a musical performance.