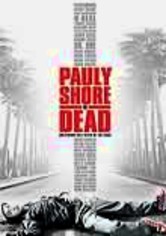 2003 R 1h 22m DVD
Stand-up comedian Pauly Shore rose to fame in the 1990s with his hit MTV television show "Totally Pauly" and continued his success on the big screen with roles in "Encino Man" and "Son in Law." Sadly, Shore's 15 minutes of fame were up shortly after. His career went into a slump, but in this film, art imitates life when Shore fakes his own death in order to become cool again -- and yet, his plan backfires when people find out he's still alive.