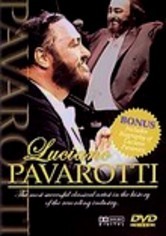 2008 NR 1h 22m DVD
This heartfelt tribute, the first to be released since Luciano Pavarotti's passing in 2007, contains excerpts from the illustrious career of one of the world's greatest opera tenors, including his famed 1989 performance in Barcelona, Spain. The presentation also contains rare clips from the master's childhood years, along with footage of his grand funeral proceedings.